As part of the modernisation of rail transport in Senegal, the new Regional Express Train (TER – Train Express Régional) line was inaugurated in 2019. 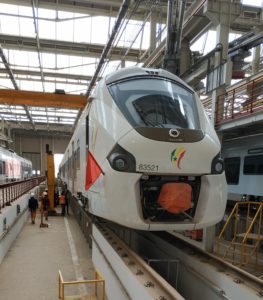 For the setec group, the new railway line covers two contracts: 1) A contract with the M1 consortium, subcontracted by Eiffage / Yapi Merkezy / CSE for the civil engineering and the railway, and 1) A contract with the M2 consortium, subcontracted by the Equans / Thalès consortium for the railway equipment, for external control of the design studies / site supervision and test management. setec is also providing OPC, interface management and synthesis services for all the work packages. This is the first major railway contract in sub-Saharan Africa for setec, as well as the first “electric” TER in West Africa. Many of the group’s companies – setec ferroviaire, setec IA, setec international, setec its, setec tpi and terrasol – are involved.

The delegated project owner is APIX (Agency for the Promotion of Investments and Major Works) and project management assistance is provided by SYSTRA. There were several challenges and obstacles to overcome on this project, such as meeting a deadline that was difficult to achieve, designing a drainage and sewage system that was consistent with the existing and planned urban network, and working in a dense urban environment with entire neighbourhoods flooding every winter.

The Dakar TER is a project divided into several work contracts (M1, M2, M3, M4, M5, M6, M7). I am responsible for the M1 contract, which includes all of the infrastructure works, such as the platform, earthworks, drainage, etc., up to the laying of the track, but also the construction of maintenance centres for the infrastructure and rolling stock. At present, the firm phase is being completed, the track has been approved for a speed capacity of 160 km/h, while the conditional phase will begin shortly for the M1 section. This is a major project for Dakar, which aims to improve traffic conditions in this large metropolis, which is growing at a very fast pace. For setec, this is an important experience where international railways are concerned, as we have created a new line from scratch in a very complicated urban context. The team is also responsible for the project management of stations and stops, contracts M4B1 and M4B2, with the construction of buildings, squares, platforms and footbridges in stations.

The Dakar TER is currently the largest project in the country and a political project, which is followed closely by the President. It is scheduled to go into service at the end of 2021, with an inauguration date fixed for the 24th of December. The M2 contract, for which we have an external control mission of all systems, such as catenary, electrical substation, line stations, signalling and ERTMS N2, GSMR telecom, SIV/SONO, MPLS network, ticketing and tertiary systems, started in April 2017. The dynamic and integration tests to allow the infrastructure as a whole to be tested were led by the M2 systems contract, in which setec is a subcontractor of the constructor. As a consortium, we have a variety of project management tasks ranging from design to integration testing and through to the commercial launch. This project allows the setec group to export skills, know-how and expertise abroad. An important aspect of the project is also the sharing of skills between collaborators in Senegal and in France.

This is one of the key projects of the Emerging Senegal Plan, which is intended to link downtown Dakar to the new Blaise Diagne International Airport in Diass, 55 km away, in 45 minutes, with the State of Senegal as the project owner. The first phase of the project is the 36km firm phase, which involves the construction of the UIC tracks for the TER and an upgrade of the existing freight line that runs to Mali. The second phase is the conditional phase, which will extend over 19 km from the town of Diamniadio to the new airport (AIBD). The works that were designed and implemented are as follows: 2 types of tracks (UIC and metric), 3 multimodal stations, 8 intermediate stops, a maintenance and storage site (SMR) and an infrastructure maintenance site (SMI). For the first phase of the project, seven contracts were created. The M1 contract, on which I am working, concerns the studies and works for a railway platform, the restoration works (bridges and footbridges), the roads and other networks, the maintenance sites and the station platforms. It is a rewarding and cross-cutting project that will contribute to the development of impacted regions in particular and of Senegal in general.

I work on the M2 contract and I am involved in the integrated project management, as the external control coordinator. I am particularly involved in the supervision of tertiary systems work. Work on the M2 market started in June 2018. The M2 contract covers the detailed design, supply and installation of all the technical systems of the project including the railway signalling, power supply system, railway telecommunication, passenger information system and ticketing. Dakar is a densely populated city with long commutes, which makes this project not only interesting, but also essential for improving urban mobility. Moreover, this is an international project insofar as the groups involved in the various contracts and their subcontractors are made up of French, Senegalese, Turkish and Moroccan companies. 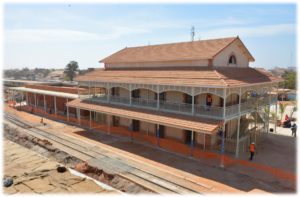