35 kilometers south-east of Paris, in Savigny-le-Temple in the department 77, the association
“The wings spread out” reinforces the offer of psychiatric care in Seine and Marne.This department is designated as a priority in the Regional Health Project of the ARS Ile-de-France, with the creation of an ambitious project: the Sénart hospital houses, with the aim of psychiatric recovery and social inclusion for everyone.

This recognized association of general interest, created in 1959 by Dr.Jolivet, accompanies people living with psychic disorders, or in a situation of psychic or mental handicap in care, insertion, housing and employment. In Paris and in the region of Ile-de-France, it offers a wide range of healthcare and medico-legal services within its 18 units and establishments, which operate in partnership with numerous public or private teams, associations or profit-making organizations.

The Savigny Le Temple project, covering an area of 6,400 m2, aims to support people living with mental health problems in their recovery journey, by offering both a range of care and comprehensive support that aims to facilitate inclusion in the home, in employment and in the city, and thus, to minimize life course breaks for people.

The objective is that the Sénart hospital houses reproduce the new form of psychiatric rehabilitation, psychosocial rehabilitation and accompaniment that could be deployed within the hospital houses of Cergy-le-Haut for nearly 10 years, by setting two priorities: promoting stable bridges with the ordinary environment among the people welcomed, but also involving the patient, and his caregivers, in the management, the care and life project and the path towards his recovery.

In addition, the location of the establishment, in the immediate vicinity of the city center of Savigny-le-Temple, will allow the development of partnerships with the hospital groups of the department and other institutions of the territory.

As for the architectural project, it is guided by several major objectives: an architecture which can dialogue with the context, which can confer an identity to this project (in particular the welcoming character), but also a functional organization facilitating the work of the staff and the lives of the people welcomed.

It is in this context that the setec group has been chosen to assist the project management, to ensure the smooth development of the association’s project by also working with a real estate developer (CAREIT Promotion), an architect from Lazo & Mure Architects and a design office (CET Ingénierie, EODD Ingénieurs Conseil).

The role of the setec group will be to advise, assist and make proposals to carry out the project. The purpose of the setec group is therefore to help define the needs by accompanying the association “Les ailes déployées” to monitor the work, especially when the installations to be carried out are complex, specific and important in size.
In addition, the setec group will be able to support the project from an environmental point of view.
Indeed, the ambitions of the association in terms of sustainable construction aimed at obtaining several Labels recognizing its sustainable building aspect through the Francilien Sustainable Building approach will be able to be guided by setec and its Engineer & Citizen approach. 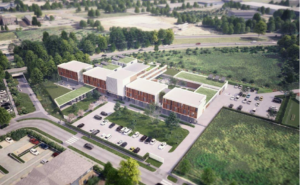