Within the iTRAM consortium (Ingérop mandataire – setec its – Richez_Associés), which has been entrusted with the overall project management, setec its is in charge of the railway, part of the urban development, and the tricolor light signaling. Setec tpi has been involved in the design and monitoring of works of art, while planitec btp has contributed its planning expertise.

The urban development works, that started in 2018, are being finalized and have given way to the railway works, which are scheduled to be completed in the last quarter of 2020.

Keolis has been designated as a future operator. It will be the first tramway operated by a company other than RATP.

Once all safety cases have been established, setec its will also lead the overall testing. This particular task consists of demonstrating the reliability of the tram before it is used by users, by means of a comprehensive test campaign: compliance with the gauge and gaps in the station, traction and braking performance, rail signaling, the behavior of the works of art, the crossing of crossroads, are all points that will be tested before the commissioning.

Arrival of the first train/start of tests

The first train was unveiled on December 3, 2019 in the presence of representatives of the State, mayors of the municipalities crossed and Valérie Pécresse – a proof that the T9 project is a priority for Ile-de-France Mobilités.

Approval tests for the new rolling stock started immediately, under the supervision of the setec its teams, on the first section of track built in advance.

The construction site, which was completely stopped during the first month of the lockdown, has gradually resumed since 20 April.

During this crisis, the project management team had no difficulty in finding volunteers to ensure site control and safety visits. In the aftermath of the lockdown, the setec teams put all their energy into restarting the working site, and together with the construction companies, find solutions to ensure the safety of all: establishment of the Site Prevention Plan, installation of worksite facilities, shifts for meals, staggered hours, etc. It is a whole logistics that was put in place in a short time, with the establishment of a zoning for day-to-day management of the site, in order to minimize the co-activity on the ground.

The distancing measures did not allow the 500 or so workers at the site to co-exist in the initial installations; the work was therefore restarted in small numbers, until an additional life base was installed at the beginning of July. It will double the number of rail laying crews to complete the work in record time (2 km of track per month).

Our engineers are committed to protecting the workers and residents of the construction site, but also the planet. This is why the T9 project focuses on gentle travel modes and vegetation: widening sidewalks, creating bike paths or bike lanes along the route and 2 km of zones 30, setting up Vélib’ stations and Véligo shelter, planting 1300 trees, 85,000 m2 of green space development…

Outside the crossroads and stations, the tramway platform will be completely grass-covered. Every effort has been made to promote vegetative growth while reducing watering consumption: installation of sedums without watering on certain areas, choice of a soil substrate and a mixture of seeds resistant to drought, creation of an innovative drip system integrated into the platform. Even the laying of the track has been adapted, in order to limit the volume of track concrete to the strict necessary, by making a sill only in right of the rails. Thus, the grass will benefit from a thickness of earth of nearly 50 cm, against 15 cm for a conventional platform.

Some of the rainwater will be stored in a reservoir structure inside the platform and will be used to grow the grass; the rest will be able to infiltrate the ground, thus reducing discharges to the public network in an area prone to flooding.

Work was also carried out on the origin of the plants and materials put in place: rail transport from Austria, existing road structures reused, treated soil in place, low-temperature asphalt, Breton granite, Burgundian limestone, plants of the Loire Valley, are all elements that you can observe while strolling along the 16 km of dedicated cycling routes. 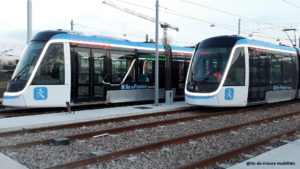 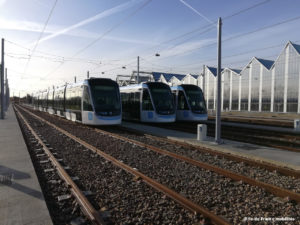 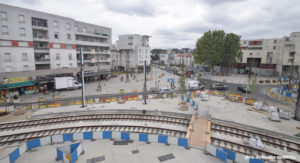